THE YEARS OF MATURITY 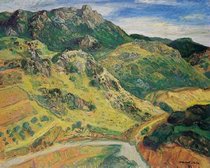 During the years of maturity Delitala continued his artistic activities along with teaching.

From 1934 to 1945 he was called in Urbino to direct the local art institute.
He then moved to Perugia, Pesaro and, after the war started, to Bologna.

In the ’50s he moved to Sicily, where he was in charge of the Art institute in Palermo and decorated important public buildings.

He never lost contact with Sardinia.
These are important years for the island, abstract art achieved its first assents, along with many criticisms.

Delitala will always remain a “figurative”, although his style changed considerably in time: the colour, thick and of matter, is freely set on the painting and the results are very different from the detailed ones of the beginning.

He produces more portraits, Nascono ancora ritratti, views, still lives.
Delitala’s old age was intense and active, until his death which occurred in Sassari in1990, at the age of 103.