The “Madri” (Mothers), his most famous sculptures, are especially significative. They are majestic and solemn, usually made with white Carrara marble or travertine.
The purity of the lines and shapes of these sculptures enclose the memory, which has never been lost, of an ancestral Sardinia, rich in life and energy.
They bring to mind the “Dea Madre”, a prehistoric divinity representing maternity and the fertility of the land.

On the other hand, the “Male Figures” sometim

es show a clear
cubist influence, while others are “blocked” in simple and linear shapes. Nivola created many terracotta works, especially tiles representing different subjects.
There are “Beds”, “Beaches”, “Swimming Pools”. Low reliefs are created very quickly, with great freshness and immediacy; these are some of the distinguishing marks of these small masterpieces in which Nivola, with great sensitivity, captured both public and private lives of his subjects.

Two public monuments in Sardinia
Even though Nivola was very busy, he kept in touch with Sardinia. In 1966 he created the square named after Sebastiano Satta, in Nuoro.

This creation is original: eight big stones, with strongly eroded shapes, are home to small bronze statues, which represent the poet in his various attitudes.
At the moment, originals are on exhibition at MAN in Nuoro.

In 1987, Nivola created the sculptures for the 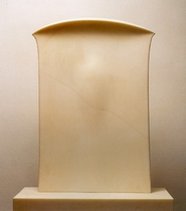 new Parliament Building of Consiglio Regionale in Cagliari. They are a series of figures, mainly female, simple in shape, which represent the concepts of life, fertility and strength.

Sudden death, the following year, prevented Nivola from attending the inauguration of his last work.

A Museum you can’t miss
For those who are interested in Nivola’s sculptures, we suggest the Nivola Museum in Orani.
This Museum, not far from Nuoro, is located on a hillside, with a panoramic view.
The Nivola Museum is a small treasure, where you can see the most important phases of Nivola’s artistic development. There is a large number of sculptures, placed outside and in a large hall, that has been converted from an old wash-house.