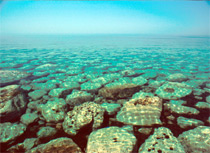 This word originated in France in 1867 but it was only at the beginning of the XX century that Rene’ Quinton studied and compared the elements which are in the sea and in blood plasma.

These studies exploited a very important characteristic of the human skin which, especially at a certain temperature and humidity, becomes a very good vehicle for the exchange between sea water and blood.

Sea water is rich in potassium, magnesium, iodine and other substances which pass through the skin, via osmosis, reaching the blood cells. This stimulates and regenerates numerous functions and prevents and treats different pathologies:

The healing properties of the sea water and the marine landscape in general have, for centuries, been well known but it was only in the XIX and XX centuries that the first thalassotherapy centers were founded.