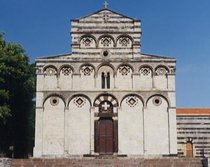 Description
Evidence proves that the Diocese of Sorres was thriving until the end of the XII century. These documents confirm the stylistic analysis, which shows that the church of San Pietro was built in different periods. The church, whose structure dates from the second half of the XI century, took on the appearance that it has today sometime between 1170 and 1190. It has unmistakable Pisan characters, such as the alternating two colours, the corner pilasters and the three row frequency of its facade.

Blind arches on pilasters divide the lower fascia into 5 segments, and the architraved portal with its bichromate arch completes the bright decorations of the lateral segments with their diamond-shaped and “Pisan rose” carvings. On the upper fascia, characterized by a strange Oriental two-light mullioned window, the number of arches is 7. This increases the pictorial effect of the carvings. There are

pilasters and “roses” inside the arches, whereas several geometrical patterns cover the walls.

The facade ends with an arched fronton, with black and white horizontal fascias that run along the sides as far as the apsidal area. The most striking feature is the snow white appearance of the bare walls, the small aisles and the apse, as well as the sharpness of the arches. The geometrical designs in dark trachyte are enchanting.

The same material has been used inside the nave and the two aisles in the cross vaults, almost creating a space where the cross-shaped “striped” pillars soar in a Gothic style: this may have been suggested by the bishop, the Cistercian monk Goffredo, whose sarcophagus is preserved here.